(And the mid of October).

I’m here to report that as of the time I published this post, I have finished four books, two of which were, uh, for English short stories.

I’m participating in Spookathon right now so hopefully I can get this number up? Hopefully.

And I have things to say about them.

So let’s talk about the books, shall we?

Note: I’m going to just be doing a bullet-point list for each short story, because we don’t have time, and also because it’s a short story. So. 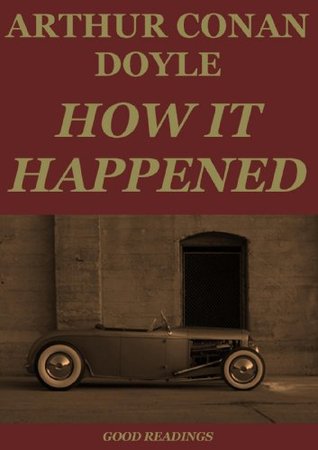 How It Happened by Arthur Conan Doyle

Sophie wants one thing for Christmas-a little freedom from her overprotective parents. So when they decide to spend Christmas in South Louisiana with her very pregnant older sister, Sophie is looking forward to some much needed private (read: make-out) time with her long-term boyfriend, Griffin. Except it turns out that Griffin wants a little freedom from their relationship. Cue devastation.

Heartbroken, Sophie flees to her grandparents’ house, where the rest of her boisterous extended family is gathered for the holiday. That’s when her nonna devises a (not so) brilliant plan: Over the next ten days, Sophie will be set up on ten different blind dates by different family members. Like her sweet cousin Sara, who sets her up with a hot guy at an exclusive underground party. Or her crazy aunt Patrice, who signs Sophie up for a lead role in a living nativity. With a boy who barely reaches her shoulder. And a screaming baby.

When Griffin turns up unexpectedly and begs for a second chance, Sophie feels more confused than ever. Because maybe, just maybe, she’s started to have feelings for someone else . . . Someone who is definitely not available.

This is going to be the worst Christmas break ever… or is it?

God, this was SUCH a hit for me! I lowkey wanna reread this already, but I WILL hold off until December, because it’s Christmas season, and therefore, the appropriate time for it.  This was actually so delightful and I couldn’t stop smiling throughout – it was such a funny book. It is comedic GOLD. The family banter was perfection, and I haven’t laughed this much and this hard when reading a book/watching a movie in a long time, and it was a great feeling. The large family was a huge highlight. I love how fun the big family was, and reminds me of some fond memories of some of my own family gatherings with my cousins in Malaysia. Obviously, my direct-extended family isn’t as big, but you know.

The tight plot structure (of the 10 Blind Dates) actually worked well for me and kept me so invested – I had to know what the dates were and how they were gonna turn out, even though I knew what was coming. Another thing I loved was the sister relationship so much, and it struck the balance between funny, making fun of but also poignant, tender and sweet.

As much as I loved this book, I did have two gripes about it. Firstly, the grey area cheating did make me feel very uncomfortable, and I know it’s all done for the sake of ~romance~, and that the girlfriend was not the nicest person, but it was not okay at all. I feel like this could have been done so much better without that part. Also, is the love interest part Filipino? It felt a little ambiguous.

The other thing was that I felt a huge disconnect with the writing and therefore found it hard to really be immersed into the story. I think it’s a me thing, but I don’t know whether it’s because I have had problems with Elston’s writing before (I DNFed This Is Our Story in March), and that was a huge reason why. Also, not to be that person, but I felt like some things were brushed over upon? I don’t know. Is that just me?

But overall, this book did some great things and I love it so much. It is the perfect holiday read, so cute and so, so close to a 5 star, but I just had a few gripes with it.

And just you all wait for the second date – it was a real riot.

Before the Devil Breaks You (The Diviners, #3) by Libba Bray

Over the last two months, I have been gushing about this series, and I would just like to restate that I would give my life for January LaVoy’s narration – it is absolutely stunning and phenomenal. She makes the series so much better, and she is absolutely brilliant.  But we must also acknowledge the fact that Libba Bray is a genius (albeit an evil genius), and that this was such a strong, interesting middle novel!

The characters are truly my favourites, both individually and together (!!!) and their character work was great here. Though some characters were pushed away, some of the character arcs gave me life. Yes, all the friendships here just added 10 years to my life, but also the friendship between Memphis, Sam and Henry? It was unexpected but WOW I LOVE IT. We stan. And the female solidarity among Theta, Evie and Mabel? YES YES YES.

There are so many good things revealed and I am excited for the King of Crows (albeit a little nervous) and I think this is my favourite or second favourite in the series so far? The thing that I love about this series is the bigger picture, rather than how everything links together, rather than loving an individual book in particular. BUT I do want to note that my expectations of this was really so high and I expected this to be a 5 star, and it just wasn’t? But it was still solid.

I just love how this series focuses on the dark side of the 1920s, because the ’20s are often a period that is glamourised in the media, and it would have been so easy to stay in that comfortable lane. Libba Bray gets so political in the series, and it is AWESOME. In three books, she covered white supremism, the Chinese Exclusion Act, segregation, the Jim Crow laws, immigration, mental asylums and so many more things I can’t even name. If you want to know more about the ’20s, this is a series I’d definitely recommend on picking up. (Like, I recommend this as a whole, but ESPECIALLY if you want to know more about this time period).

I will admit – something that did throw me off was the plot structure of this book. It was so different and it did throw me off? That didn’t mean I didn’t like it, I just had trouble adjusting is all. And on that note – the pacing was definitely a weird one for me. While the first part was hard to get through (and frankly, a little boring), it picked up in the last 15% and I binged it within two days. You have to go into this series slowly and honestly, binging is not the best way to experience it.

But overall, this was great, and I’m excited.

The Fly in the Ointment by V.S Pritchett